The Trailer and Poster for FOXHOLE are Here! 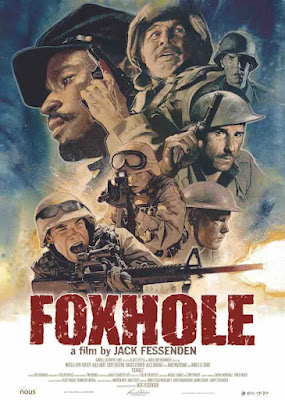 The trailer for FOXHOLE has dropped, along with a gorgeous new poster by Graham Humphreys.

See it all at at ComingSoon.net! 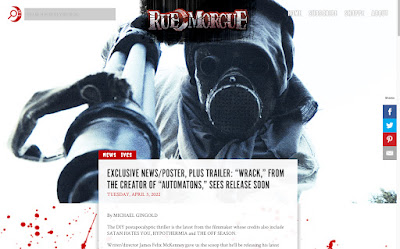 Michael Gingold at Rue Morgue gives you the story on WRACK, along with a first look for readers of the first poster for the movie. Read it at Rue Morgue. McKenney produced WRACK, which was filmed in Delaware County, New York, for under $1,500. The props and costumes were created by McKenney, often recycling wardrobe and hardware from Glen McQuaid's I SELL THE DEAD and his own AUTOMATONS. Both films are screening this month at MoMA The Museum of Modern Art as part of the museum's current "Oh, the Humanity! The Films of Larry Fessenden and Glass Eye Pix" film program.

WRACK takes place in the distant future, centuries after nearly all life has been wiped out by war, disease, and environmental collapse and focuses on the planet's four remaining survivors who struggle to get along with each other even more than they do to survive. All of the masked characters speak in a fictional language created by McKenney for the film, with subtitles in English.

The film was produced by McKenney and veteran filmmaker J. Christian Ingvordsen (BLUE VENGEANCE, RAINING HELL) and stars Carol Ames, John Christian, Braxton Sohns, Emma Sugler, and Jennifer Boutell. The original score for WRACK is by the late Mink Lungs guitarist & vocalist Tim Feleppa, who recorded all of the music on an iPad while living in his car.

Channel Midnight Releasing was founded in 2010, releasing Nathan Wrann's experimental revenge movie, BURNING INSIDE, in December of that year. McKenney recently decided to resurrect the label after a lengthy hiatus as a home for WRACK, with a remastered edition of his first feature, CANNIBALLISTIC!, coming later.

"Spending more money on festival entries, traveling to film markets, and the various expenses that pile up while delivering to a distributor than we did on making the actual movie seems like a betrayal of what we set out to do with this project," says McKenney, "It makes more sense to me to continue with the same DIY spirit that WRACK was conceived and release it ourselves."

WRACK is expected to be available via streaming and blu-ray this summer.

The film's trailer is available to watch here.