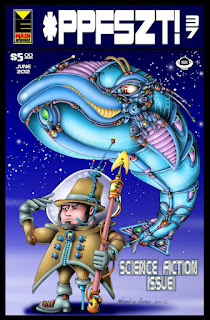 *PPFSZT! #37 - the Science Fiction Issue - is out now and features a vintage 5-page comic story entitled "The Chip" written by James Felix McKenney with art by Richard and Alan Limacher. The whole book is packed with 52 pages of incredible sci-fi comics, so be sure to order yours today from Main Enterprises! 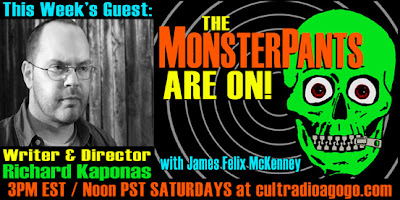 This week on "The MonsterPants Are On!" writer and director Richard Kaponas  calls in for a conversation about small town video stores, the recent release of his feature film directorial debut RANCHERO, his latest short MALE RECEPTIONIST and working with actor Danny Trejo.

Learn more about Rich and his work at: hauntedhouseofprojects.com

Tune in to hear all he has to say this Saturday, June 30 at 3pm Eastern / Noon Pacific on cultradioagogo.com!

We are taking a brief hiatus from the production and selling of James' handmade toys and shirts while we work on some new MonsterPants projects.

The Sea-Borgs will return soon and we've got a new film project on the way.

In the meantime, you can still order "classic" MonsterPants merchandise from the shop and please be sure to check back for updates on the new stuff we have in the works.

Angus Scrimm on this week's "The MonsterPants Are On!" 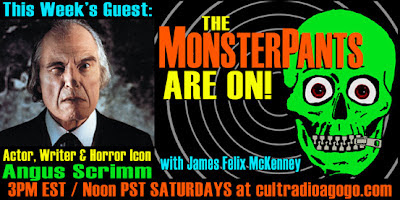 PHANTASM's "Tall Man" visits the show to share his thoughts on his favorite films from Hollywood's Golden Age, this summer's blockbusters, working with cult film director Jim Wynorski, his role on JJ Abrams' "Alias" and that Dread Central story about PHANTASM 5.

Get the scoop this Saturday, June 23 at 3pm Eastern / Noon Pacific on cultradioagogo.com!

Second Chance to Hear Reggie Bannister on "The MonsterPants Are On!" 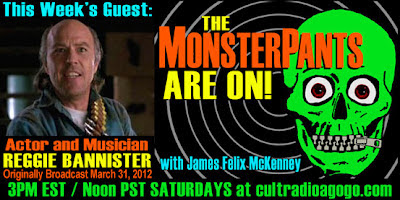 Due to some poor time management on the part of your host, the announced episode of "The MonsterPants Are On!" with Angus Scrimm will not be airing this Saturday, but next week, June 23.
Instead this week's show will be a rebroadcast of the March 31st episode with Angus' PHANTASM co-star Reggie Bannister. So if you missed it the first time, now is your chance!

Musician, actor and star of the PHANTASM film series, Reggie Bannister, will be James' guest to discuss vegetarianism, Reg's service in Vietnam, his music career, San Diego Comic-Con and the avalanche of new films he's got coming your way.

It all happens this Saturday at 3pm Eastern / Noon Pacific on cultradioagogo.com!

On the Next "The MonsterPants Are On!" - Debbie Rochon! 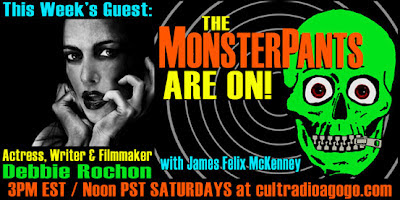 Picking up where we left off back in March, actress, writer and filmmaker Debbie Rochon tells us about more of her favorite acting gigs, appearing on the cover of this month's issue of Fangoria magazine and her directorial debut MODEL HUNGER!

Check it out this Saturday, June 9th at 3pm Eastern / Noon Pacific on cultradioagogo.com!