In this, the 50th episode of the world’s worst podcast, Laree and Jim invite you to celebrate the holidays with them by watching with them the 1984 Star Wars TV movie “classic” Caravan of Courage - An Ewok Adventure!

Listen to the podcast to hear the show’s introduction and the usual chitchat. Then when the boys say it’s time, hit start on your own prized copy of the film or the YouTube video provided on the Before Geeks Were Cool Facebook, Tumblr and Twitter accounts to share the Ewok experience with your hosts.

It’s like spending the holidays with your family, but far, far worse. You have been warned.

Hear "The Tribunal of Minos" for Free at Indiewire! 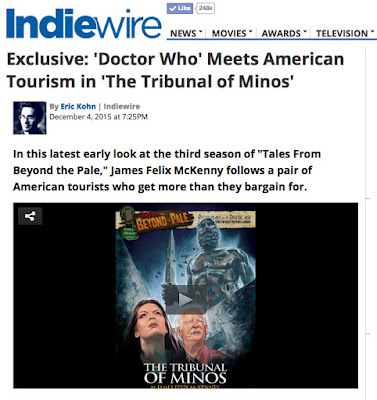 Now you can hear James Felix McKenney's episode from Season 3 of Tales from Beyond the Pale streaming for free at Indiewire.com along with an exclusive interview with the writer/director. This stream is available for a limited time only, so tune in now!