Congratulations to Laura Camien for winning Best Actress of the Festival for her performance in "For Closure" at San Francisco's Best Actors Film Festival. 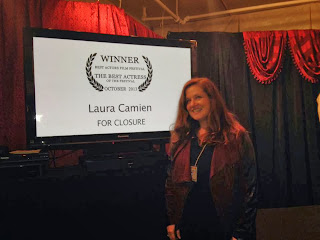 "For Closure" is a short film written by and staring Laura Camien and directed by James Felix McKenney. It was co-produced by Camien and Lisa Wisely and shot in Orlando, Florida by cinematographer Eric Branco.

CHAPTER FOUR Available to Own NOW!

Head on over to monsterpants.net or the Channel Midnight shop to get your digital download of CHAPTER FOUR!

CHAPTER FOUR is the first episode in a proposed 10-part low-fi sci-fi serial written and directed by James Felix McKenney.

The film is yours to download for $1.99 USD. All profits from the sale of CHAPTER FOUR go toward the production of the next episode in the series, CHAPTER SEVEN.

The project's writer and director is genre-bending DIY filmmaker James Felix McKenney (Hypothermia, Satan Hates You) who is co-producing the series with Lisa Wisely of The Work Room. Eric Branco (Hypothermia, V/H/S) is Director of Photography.

CHAPTER FOUR embraces its minuscule budget with a low-fi sci-fi style that takes its cues from a wide variety of influences including 1950's B-movies, early experimental films, Japanese underground cinema and 1960's "Doctor Who" episodes.

The film is intended to evoke the pre-internet and pre-home video experience of discovering a cult television series or film for the first time by just stumbling upon it in the middle of the story. Future episodes will be filmed and released out of order to keep the mystery alive and to cause audiences to ask not only, "What will happen next?" but also "How did we get here?"

The trailer for CHAPTER FOUR is now available at: monsterpants.net/chapterfour.html

CHAPTER FOUR itself has a running time of approximately 9.5 minutes and will arrive as a digital download at monsterpants.net on October 8. This first available episode costs $1.99 to own and all profits from the sale of CHAPTER FOUR will go toward making the next part in the series, CHAPTER SEVEN.